Sponsorship for Mark Darryl Macas in the Philippines 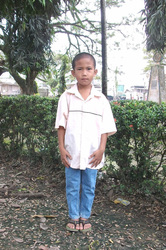 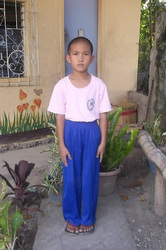 This is a Chip In to help sponsor a sweet 9 year old boy in the Philippines named Mark. Mark is 9 years old and his birthday is October 31. He is in 4th grade, and he is doing above average in school. At home, he is in charge of washing clothes, gardening/farming, running errands, cleaning, animal care, carries water, gathers firewood and kitchen help. He likes to play group games, bicycling, playing house, walking, marbles, basketball, hide-and-seek, cars, running, art/drawing, jump rope, singing, and story telling. He lives with his mom and dad and he has a 10 year old sister named Gen whose birthday is on July 6. His dad is employed as a farmer and his mother in unemployed and writes all of his letters. He lives in the city of Poblacion, and typical houses are constructed of wood and have thatched roofs. The most commonly spoken languages are Cebuano and Visayan. The regional diet consists of maize, bananas, chicken, fish, bread, cassava and rice. Common health problems in this area include malnutrition, diarrhea, colds, fevers, respiratory infections, worm infestations and skin diseases. Most adults are unemployed but some work as day laborers and earn the equivalent of $75 a month. This community has electricity but needs improved sanitation, income generating activities, affordable health care and community development programs. Your sponsorship allows the staff of Agape Child Development Center to provide your sponsored child with Bible lessons, medical and dental treatment, sports, talent showcases, educational field trips, school supplies and fees and leadership development programs. This area has a population of 7500 people with the capital being Illiagan and Mark lives 83 km southwest of Illigan. Homes in this area typically have wood floors and wood walls. The roofs are typically made of leaves/grass/thatch. the warmest month is in April with the coolest month being in December. The climate is generally humid and the terrain is pains/flat land. The planting months are in June, July, December. With the rainy reason being in May, June, July, August and September. The harvest months are February, March, October and November. With the illness months being in March, April and May. The average family income is $75 a month with the primary occupation being Laborer.